All photos in this post are (c) Christine Moeller.  Thanks Chris or letting me use some of your amazing photos! 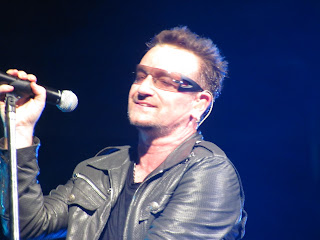 Show day, we were all excited and headed off to the stadium in the afternoon.  The Commerzbank Arena is situated beside a forest and you have to walk through it to get to the stadium, it really is a lovely setting. We waited for the band to arrive, it was a very hot day but luckily where we were in the shade of the forest and even had log seats to rest on.  We got talking to other fans which helped pass the time.  One of the security people told one of the German fans that U2 would arrive at the airport at 4.30pm and then come to the stadium.  That seemed to be true as at around 5.40pm security was increased, we were told to stay where we were and if Bono wound down the car window we could go across.  A convoy of cars headed by two police outriders arrived, and sped into the stadium.  I've never seen U2 arrive in such a convoy, it was impossible to see into the cars and no one wound down a window and anyway it would have been difficult to stop a the convoy would have been backed up the road. Of course it was too soon to have a band sound check which was a shame, I always enjoy listening to them.  Ahh well, c'est la vie! 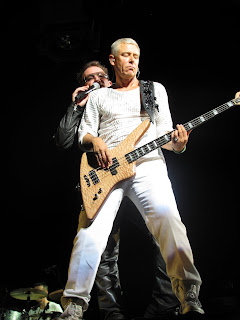 We went into the stadium and had something to eat sitting in the lovely sunshine.  We went to our seats, great ones at the front on a small tier inbetween the upper and power tiers on Edge's side.  Kasabian were the support, they were ok.

The Claw and stage all looked the same to me, though I've heard some people saying they thought the catwalk was smaller.  It must have been difficult to erect as there was a kind of capsule suspended high up in the middle of the stadium which was held in place by horizontal cables.  One of the Claw legs was very close to the capsule and the "spike" had to be placed between the cables, it must have been a logistic nightmare, no wonder it was already nearly built on the Saturday that we arrived in Frankfurt.


I'm not going to review the concert song by song, I'll just write about aspects of it that stood out for me.


As before, Space Oddity opened the gig, but the band's entry was different, they all walked on together from behind the stage and then went straight into Return of the Stingray Guitar (typical long-winded U2 song title LOL!)  I really liked the tune, which was mainly instrumental.  Bono was doing a circuit of the catwalk during it, throwing funny Zoo-like poses.  It was humourous and yet also very touching as it was almost like Bono was showing us he was all better after his operation and we, the audience, were celebrating that with him and sending him our love.  It felt very powerful and I felt very emotional myself, we nearly lost him as a performer and I was so glad to see Bono cavorting around the catwalk in his own clumsy, inimitable way 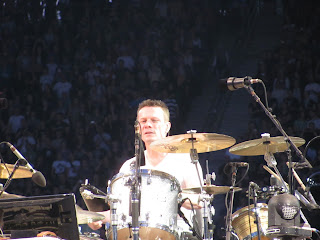 Bono thanked the German doctors and nurses who treated him recently and said he now had "Made in Germany" stamped on his arse!  He likened U2 to German cars, Edge was a Mercedes Benz, Adam a BMW and Larry a Trabant.

Miss Sarajevo was brilliant, I am still stunned by how Bono can sing opera like that!  The audience clapped and cheered as he gave everything he had,  a spine tingling moment.

The video for The Unforgettable Fire had been changed.  It was more colourful and very pretty, but it didn't have the same link with the music.  The Crazy remix seemed a bit different, the chorus was more upfront, it seemed more refined, and though I liked it, I preferred last year's rawer version.

Walk On and the masks are gone!  Yay!  Instead the people carried lanterns with the Amnesty International symbol on the front to highlight their Free Burma Campaign.  In my opinion this worked well and it touched me much more than the creepy masks. 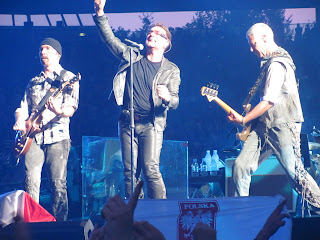 Hold Me, Touch Me, Kiss Me, Kill Me replaced Ultraviolet in the encore.  The steering wheel was now lit up in red, which was much better.  Now I'd been disappointed to hear Ultraviolet had been dropped, but I loved HMTMKMKM!   It was performed in a very theatrical way, Bono looked menacing, the red of the steering wheel reflected in his glasses added to the overall effect. I'd forgotten that I really liked this song live much more than on CD.  Loved when Bono sat on the wheel and swung on it, he'll be on a trapeze next!

With Or Without You was simply stunning.  The show finished, as last year, with Moment of Surrender, (dedicated to those who lot their lives in the terrible crush at the recent Love Parade in Germany) and I still feel it doesn't work well as a closing song.  I felt that night if the show had finished with With or Without You it would have been perfect. 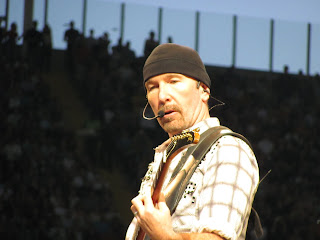 General comments - Frankfurt had a great audience, very responsive, there were times when the whole field and much of the stands was leaping about, wonderful atmosphere.  There were a couple of minor technical hitches and the sound wasn't the best I've heard.  And finally, I must say that those tight leather trousers of Bono's make me glad that I'm a woman and can appreciate how they cling to his delightful arse, thighs and other bits, fabulous! 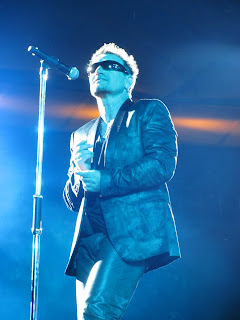 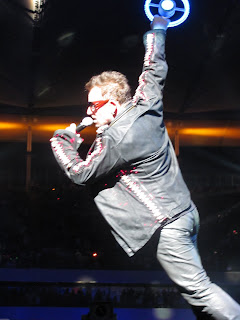