I'd heard about U2 playing in at the Brandenburg Gate Berlin on the radio and tried to get tickets, but was disappointed not to get lucky (as usual, I never win anything). Then, out of the blue I heard from my German friend Chris, who had a spare ticket and said I could have it if I wanted! I jumped at the chance.
Berlin was a city I'd always wanted to visit. My mother was German and when we used to go to visit my grandparents in Germany we got the ferry from the UK to Hook of Holland and there got the train to her home town in Westphalia in the then Western Germany. It always felt like an exciting adventure to me, I watched the station names pass by, Gouda - Utrecht – Amersfoort – Hengelo – Rheine – Osnabruck are some I remember, everything was so different. That train’s destination was often Berlin, to me a place way behind the Iron Curtain, isolated and divided by the Wall - in those days the Cold War was in full swing. Berlin, in my young mind was a far off, dangerous, mysterious, yet fascinating place, and in reality it was all those things. I've ended up in many places all over the world because of U2, but this was one that was really special to me.
I arrived in a grey and very cold Berlin after a rather convoluted trip from Schonefeld airport. But hey I was here, in Berlin, and so excited! It was trying to snow but that didn't dampen the thrill at all.

After settling in at my hotel, I wrapped myself up in a warm jacket, scarf and gloves for a walk. Potsdammer Platz, with it’s glimmering new buildings was ten minutes walk away. It was lively, with shops, swanky hotels, cinemas, a little Christmas market area with stalls selling food, Christmas decorations, hats and scarves, sweets, there was even a carousel for kids. I walked another five minutes and there I was on the famous Unten den Linden (under the lindens, apparently the only trees that would grow on the street) And there on one side of the Pariser Platz was the famous Brandenburg Gate, the symbol of German reunification. Normally it stands there in the square in all it’s glory, but now all the preparations for the U2 concert filled part of the square, yet the Gate was still awe-inspiring even with the work going on around it.

I heard lots of English spoken with Irish accents around and a few fans stood by the hotel adjacent to the square, so U2 were probably staying there. It was too cold for me to hang around for them and I left and walked back to my hotel.

The next day I woke to very welcome blue skies and sunshine! After breakfast I walked to Potsdammer Platz once more to catch the sightseeing bus. I wasn’t going to be in Berlin long so I wanted to see what I could and I thought the best way to do that was to go on a tour.

One of the first things we saw was part of the Wall that remains, there are bits of it still around, there was also a small piece in situ in Potsdammer Platz. It looked really forbidding and to think there was twenty eight miles of that wall! Nearby was the well-known Checkpoint Charlie with tourists posing for photos with a “guard”.

We passed an area with lots of colourful Trabants, a reminder for me of U2's Achtung Baby and Zoo days. Berlin Cathedral was magnificent, strangely surrounded by a lot of open ground where building work was going on. This kind of thing was evident in many areas in the city, they are probably areas in the east that had decayed buildings now demolished and new ones will take their place. We passed the famous satellite-like 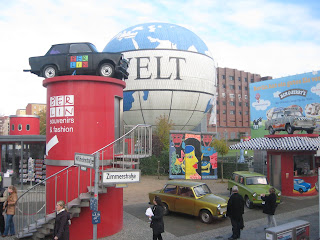 TV tower, another symbol visible from many parts of the city.

We drove down Friedrich Strasse and the guide told us one of the U-bahn (underground) lines ran under the street, it stayed open after the division of the city and guards on the East side made sure no one got onto the trains. It was hard to imagine that this city so divided until just twenty years ago.

Then we turned into Unten den Linden, the guide mentioned the U2 concert and I could hear music, so I think the band were sound checking at that lime. I did consider jumping off the bus at this point but sense prevailed

!We went on past the Reichstag, impressive with its glass dome representing the original cupola (the building was severely damaged by a fire in the 1930‘s and also during the war, and was not fully restored until after reunification).

We passed by the Tiergarten, a very large park. On a traffic island on a busy roundabout within the park was the column on top of which was the Siegessaule, the golden angel of victory, she glistened in the sunshine. Of course I was taken back to U2 again for U2’s video for Stay which featured the statue.

We went on to a main shopping area of the city and I saw the famous KaDeWe store. Then shortly afterwards we were back at Potsdammer Platz where I’d joined the tour and I got off the bus. I really enjoyed the tour and it gave me a good snapshot of the city.

For my lunch I got a bratwurst at one of the market stalls, it was delicious, I love bratwurst. A strange fact about Berlin is that it has a currywurst museum! Only in Germany.....
At 2.30 I set off for the meeting point I’d arranged with Chris. On the way I passed the Holocaust Memorial, dozens and dozens of coffin-shaped black granite blocks of different sizes. It was moving in it’s simplicity and a beautiful memorial.

I met up with Chris at the hotel beside the Brandenburg Gate. It was lovely to see her again, we hadn’t managed to meet up during the tour earlier this year, so this unexpected opportunity to meet up was lovely. She introduced me to her friends, a lively bunch of people who were very friendly and kind to me. We all went to an outdoor café near the Gate for something to eat and drink. Tiny bottles of vodka shots appeared from everyone’s pockets and they generously shared then with me, they warmed me up! It was starting to get dark by now and the temperature was dropping rapidly.

At 5pm some of us went into the concert site leaving the other still hitting the shots and beer. My ticket was for a different area, so after arranging a meeting point for after the show, Chris and I went our separate ways.

I could have got fairly near the front but because I’m not very tall it was pointless staying there as I couldn’t see over people in front. So I went much further back and I could see the stage pretty well from there. Time dragged and the cold started to bite. The crowd was easy going and I heard quite a few languages around me, there was a tangible excitement in the air. Floodights shone into the sky their beams hitting the very low cloud peppering it with discs of light, giving the impression that there was a grey canopy overhead.

The gig was supposed to start at 6.30pm, but that came and went. I paced about to try to warm up, no U2, it started to rain, the drops sparkled like diamonds as they were illuminated in the beams of light.

The rain didn’t last long thank heavens. Quarter to seven no U2. More pacing, I cursed Irish Time, I was so cold. At last at 7pm U2 came came onstage to massive applause and cheers from the crowd. They went straight into One, was so apt as it was created in this city. As the music swept over me I suddenly felt really emotional, tears came to my eyes and I had a lump in my throat. I think it was a combination of seeing U2 again, being in Berlin, the significance of the event and the general emotional atmosphere within the crowd. I was so moved. 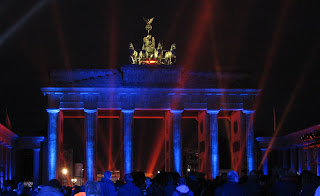 Colourful graphics relating to the Wall were beamed onto the Brandenburg Gate during the song and it worked really well. Next was Magnificent which was wonderful, what a brilliant song that is! The third song was Sunday Bloody Sunday, a song I am really tired of in live shows, but for this occasion it was appropriate, Bono changed the lyrics too. Jay-Z joined the band on stage and rapped for a while, something I could have done without, but the crowd seemed to enjoy it.

Bono talked a little about Berlin and recalled the time the band spent there whilst recording Achtung Baby saying they “wrote some tunes, met some beautiful spirits". Another time he said - in a strong southern US drawl - “swayin’ like a field of golden corn” (or something very similar) I’ve no idea what he was talking about!

Next was Beautiful Day another very appropriate song for the occasion, again I felt very emotional and I never normally feel like that during that song. I think it again was the atmosphere and the crowd singing on top of their voices, I could only imagine how special this occasion felt for native Berliners.

Vertigo rocked, and they closed with Moment of Surrender. Short but wonderful, U2 never disappoint live. For those who have read about U2 erecting a “wall” around the gig site that’s rubbish. There was a security fence around the site which I fully expected. There were rumours of up to 100,000 people coming to listen and they needed to have some safety measures in place. Also anything that was done at that gig was nothing to do with U2 anyway as it was an MTV production.

The crowd dispersed and I met up with Chris and we went back to the café to meet up with her friends. During the gig I hadn’t felt or thought of the cold, but now sitting in this outside café it really got to me. After a while I said I’d have to go as I was so cold. So I said my goodbyes to Chris and her friends and walked back. I passed the back entrance of the hotel and a handful of (hardy!) fans were waiting for the band. I walked past, no way was I going to join them, all I could think of was to get out of the cold!

At the hotel I had a hot coffee in the restaurant before going to my room. I was still cold, had a hot shower, slightly warmer, turned the heating up as high as it would go and after about twenty minutes I felt better (I am very cold-blooded!). How I suffer for U2!


Looking back almost two years now on the trip I almost find it hard to believe it happened! It was all so quick. Berlin is one of the most unusual cities I’ve visited and I find it hard to sum up how it felt for me. Berlin is a city that has risen up from the ashes twice in 65 years, it has been ripped apart and is trying to heal itself. Much of the city I saw has re-grown into a vibrant, modern place, but there are still scars of the past, both physical and psychological. Maybe the Fall of the Wall 20th anniversary celebrations and time will help it heal.
Posted by Sue Fell at 19:58 No comments: