Another beautiful warm and sunny day in Boston, apparently the weather was much warmer than usual for the time of year. We went to Banknorth Gardens and waited by the back entrance, there were about 40 fans in all I would say. We saw Larry arrive, h 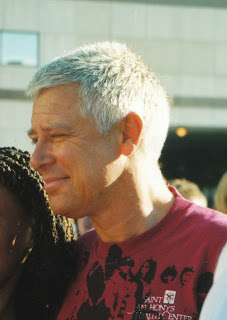 e waved. Then Adam whose car went up the ramp and then came back down again backwards! LOL! He got out of the car and signed for fans, he was charming.

Then before we knew here was Edge sauntering down the 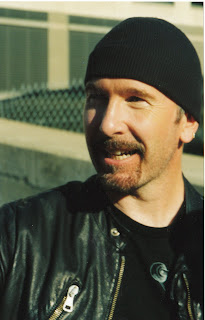 ramp and he too was so friendly and signed lots of articles for fans, who were by this time quite excited.


Finally Bono arrived. His car stopped at the bottom of the ramp and his minder asked everyone to stand back on the kerb which they did. Bono methodically worked his way along the line of fans on the other side of the road first, chatting, signing, posing for photos - one with a fans young son (ages about 4 or 5) who couldn't wait to get out of Bono's arms back to his father's! As he got to the end of that side a Duck Tour came past , it was funny to see the recognition dawning on people's faces when they realised it was Bono there in the street, he gave them a wave.

He then came across to our side of the road, he glanced up at us as he was signing our stuff, recognised us and kind of doubled back giving a wink, he asked Julie. "How is everyone?" Then to me he smiled and said. "You've picked the good weather!" I replied. "Yes it's lovely." And that was my interaction with Bono, you meet a world famous rock star and you talk about the weather! But then in Ireland and the UK we talk about the weather a lot as it's so changeable! Dianne asked whether they would be playing Bad and Bono replied that he didn't know, they hadn't decided yet. 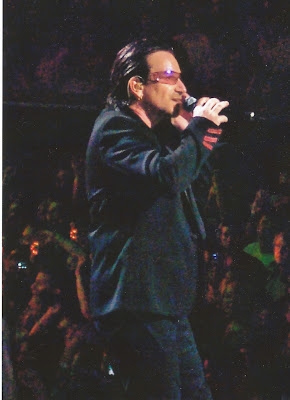 g to the arena for the gig. Our seats were very good, in the first block on Edge's side.

The set was very similar to last night's, except that they did Crumbs and an acoustic Stuck. We were close enough to see that Bono was reading the lyrics to Stuck from a sheet of paper on the floor! It was a good show and we couldn't have asked for better seats.


So that was it, our last Vertigo Tour show, it had been a great tour once more, I loved all the travelling, places, people, shows we saw. Roll on the next tour!


We only had one more full day in lovely Boston. We went to Boston Common which was lovely and then onto the Cheers bar (really called the Bull and Finch). The entrance was just like on the TV but inside it was different, still it was nice to see as I loved that TV series. We had the obligatory photo taken outside of course!


We went to the Prudential Tour and took the lift up to the 50th floor to see the amazing views over the city. It was still warm and sunny and visibility was fabulous. The river meandering to the sea, the city spread out before us, it was noticeable there was lots of green in the city and that the downtown area was compact.

That evening we went back to the Prudential to have a meal at the Top of the Hub restaurant on the 52nd floor and had a fabulous meal with that gorgeous view. It was our farewell to Boston treat to ourselves and was worth every penny. I love Boston, and hope I will be able to come back one day.

(Edge and Adam photos by Dianne Beeaff)
Posted by Sue Fell at 16:13 No comments: