At the end of September Julie and I flew over to Boston for a week's holiday combined with two U2 shows. This was to be my first visit to Boston and I didn't really know what to expect, most of my visits to the US so far had been to the West. We had a relatively short flight (compared to the longer haul ones to the west of the country). The approach to Boston was lovely very green and lots of little islands in a blue sea. 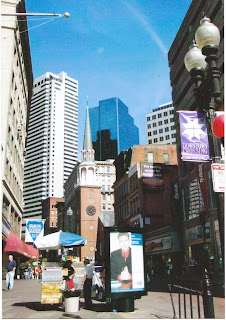 New and old in Boston

We stepped out of the plane into warm sunshine and luckily that's how it stayed for us for the entire week! Our hotel was lovely though the room was very small. I quickly decided I really liked Boston. It had a leisurely pace and for the first time on a visit to America I felt it had a history in the city. Most American cities are so new (to a European anyway!) that for me they don't have a sense of a past, but Boston did have that and I liked that.

We spent the first few days sightseeing and went on the famous "Duck" tour, our duck was called Molly Molasses and our guides proper job was a doctor and she called herself Dr Quack! LOL! The city was lovely, old and new mixed together, lots of green areas and parks and of course the ocean. The ducks are amphibious vehicles and Molly slipped into the Charles River and from there we got fabulous views of the city. The duck trip was very informative (did you know there are 81 Dunkin Donut outlets in Boston?!) and also fun.

We visited Quincy Market, Fanieul Hall, lots of shops, Boston Common and lots more, there is so much to see in the city that we did not get anywhere near to seeing it all.

On 2nd October Dianne joined us, it was good to see her again. Next day was our first U2 gig. It was at Banknorth Garden just a short walk from our hotel. I had to pick up the tickets, no problem there and we were also given wristbands and told to come back at 5pm and get into line according to our numbers. Very organised, and it meant we were free to go off and do our own thing. We decided to have a meal at a nearby restaurant before going back to the arena to wait for the band arriving. They arrived very late and did not stop - later we found out that they were late because their plane had been delayed.

Once in the arena we couldn't find any space on the barrier, and as we are both quite short we decided to stand at the sound desk where there was a little platform. It turned out to be a great place. Keane were the support band and I really enjoyed their set and they went down very well with the crowd.

U2 came on just before 9pm, the stage looked small compared with the European stadium gigs but I much prefer arenas. They started with City of Blinding Lights with the "curtain" of glistening lights around them, it looked very beautiful. The set was much like the shows we'd seen already. Miss Sarajevo was stunning when Bono sang the operatic Pavarotti part, his voice just filled the place, I could hardly believe it was him! The audience clapped and cheered. It's kind of like Bono is still trying to prove himself to his now deceased father by singing the opera he loved so much. There was a really lovely acoustic encore of The First Time and Wild Horses. They finished with 40 which was a much better ending than the high energy repeated Vertigo they did in the European shows we saw, U2 should always finish gigs low-key, that's their way and it works.

We hung around at the back for a while afterwards, the only band member we met was Larry who was very pleasant, he shook hands with people, signed autographs and even posed for photos!

I really enjoyed the show, though I always find American shows are not as exciting as European ones, or maybe it's just me. We walked the short way to our hotel and drank wine, ate nibbles and discussed the show before going to bed.
Posted by Sue Fell at 22:02 No comments: