Another day another gig. This one started well, our seats were a lot better, lower tier about halfway down the pitch. As soon as U2 came on we realised the sound was great too, after the previous gig that was a relief.

Bono talked a lot at this concert, he said they were the worst wedding band in the world but the best rock 'n' roll band. He said it was going to be a "party night" and that's certainly what this night turned out to be. Then he said about the Irish stealing Edge from Wales and delivering him to the GAA (Gaelic Athletics Association). More seriously he talked about the "fragility of life" and how it had affected them personally recently, then he dedicated Miracle Drug to "all the doctors and nurses that keep us alive."

The set was pretty much the standard one, the only surprise in the set was the inclusion of Party Girl. Bono got a lad called Brad from Canada up on stage to play the guitar. He's held up a sign saying "I can play guitar", Bono said, "It pays to advertise!" During the song he changed some of the lyrics singing, "I don't give a shite", a reference to the 11pm curfew which they passed by around ten minutes.

The energy of the gig was brilliant, exhilarating. I felt proud of U2 and along with the rest of the crowd sang along and enjoyed every moment. The feeling of being part of something special was very strong and the love of the Irish was so apparent for their band. I felt part of that too, because I'd just discovered I had Irish ancestors, so was one of them as well, a great feeling!

Getting back to our hotel afterwards was a bit of a nightmare. We waited in a chaotic taxi queue for ages. In the end we gave up on that and got the night bus back, arriving at 4am, ahh the touring life!

This gig was a wonderful way to end our European leg of the Vertigo tour. We were going to see two shows later in the year in Boston so the Vertigo Tour wasn't quite finished for us yet. 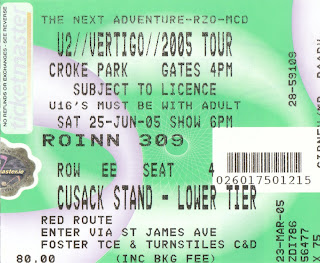