Going to the South of France had been on my wish list for a very long time.  When my friends and I saw U2 were playing a gig in Nice we decided to combine seeing our first U2 360 Tour gig with a holiday in the Riviera. We stayed in a truly French apartment close to Nice's Old Town and Port.  We quickly fell in love with this gorgeous area, the views, food, joie de vivre, no wonder this area has been a favourite of the rich for decades.

The stadium U2 were playing was quite a distance from our apartment so we treated ourselves to a taxi.   Our taxi driver, Jean Marc, (who we got to know quite well over the week as he ferried us about the city) said, "Good luck" when he dropped us off at the Charles Ehrmann Stade des Sports as it was an extra hot day in Nice. Being from the far north of England I'm not very good in very hot weather so I had been careful to drink lots of water and had my can of Magicool in my bag - thank heavens for that stuff, it really makes a difference . 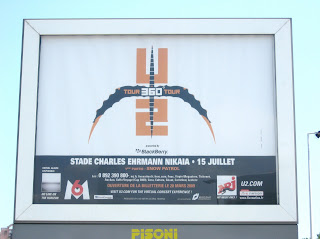 It was 3.30pm and it was still very warm and l was worried I wouldn't be able to cope with the 30 degree heat. But fate was on our side and a few clouds started drifting across the sky cooling the temperatures just enough to make them bearable.

We could see The Claw, (or La Griffe as it was called in French), towering above the stadium, it looked a strange creation indeed. The stadium is situated in the north west of the city and flanked to the north by mountains and impressive cliffs, such a beautiful backdrop for the gig.

At 5.30pm the doors opened, and to my despair (but not surprise) the Magicool was taken off us - the security woman laughed as we had one last spray before discarding the tin. We were in the very cheap non-reserved seating, which really was only large concrete steps, you sat on one step and put your feet on the next. We chose seats that soon would be in shadow and were to the right of the stage. It was quite a good position and we had unobstructed views, except for a leg of The Claw. It certainly is a massive structure and on first sight in real life and daylight isn't exactly pleasing on the eye.

Time passed and gradually our bums got numb from sitting on the hard concrete. We got up shuffled about, sat down, got up again..... no wonder these seats had been cheap! The music being played was rather boring, a lot of it I didn't know which would not have gone amiss playing in a lift.

At 8pm Snow Patrol came on and instantly we realised what a great sound system lay within The Claw, it was crystal clear. I love Snow Patrol, I really like Gary Lightbody's voice and think they have written some fantastic songs including the classic Chasing Cars. They played a wonderful set of mainly their most well-known songs. Run gets to me every time, I could feel the emotion build up in me, I simply love that song. The band went down well with the audience too which was good to see. 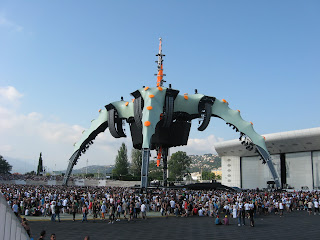 9pm came and went, bums got number, but the rest of our bodies cooled down a little as the sun dipped lower in the sky. We speculated on what U2's entrance would be like. A helicopter was flying very low overhead and we joked that maybe they would parachute down and each slide down a leg of The Claw!

Finally at 9.30pm David Bowie's Space Oddity boomed out (one of the few decent songs played) and we knew this just had to be the start, and it was. Larry came out and played the drums and the band exploded into Breathe. It worked well live and was an ok starter, though I think Magnificent would have been much better to start the show. The sound was the best I'd heard at a U2 concert and Bono was in good voice. He also looked very slim, where were those thighs and bum??!

Next was my favourite from the album No Line On The Horizon. I dialled my friend Dawn's number on my mobile and she was able to listen and enjoy it many hundreds of miles away in Scotland, the wonders of the modern world! The performance was stunning. The Claw almost seemed to come alive during the performances, puffing smoke, lights creating different effects, 360 video screen had very clear pictures of the band and videos and even stretched out at times.  The Claw is definitely more impressive at night with all the lighting effects.

Loved Magnificent, those opening notes are so distinctive and it went down extremely well with the crowd.
Desire was followed by snippets of two Michael Jackson songs in tribute, the last of which was Don't Stop Until You Get Enough. Bono repeated the last line over and over his voice getting softer each time until it was a whisper. I thought that was very effective, signifying how Michael slipped away from this life.

Stuck In A Moment.... was next dedicated to, "Another Michael". It was really good to hear this song again and it was performed so well.

Next was Unknown Caller complete with karaoke-like lyrics on the screen. I didn't like that and I don't like that song any better now I've heard it live either.

The screen then had a metamorphosis and lengthened downwards until it was just above the bands' heads, it was like The Claw was coming alive, I almost expected it to start kicking out its legs to the beat next! Impressive.

A real treat came next, The Unforgettable Fire. And it was excellent, the video screens echoed the song with swirling reds and Bono remembered all the words (which can't be said of some other songs at this gig!). It made me realise just what a complicated, mature song that is both musically and lyrically, such an achievement for the then (1984) very young band.

A more recent tune was next in the set, City Of Blinding Lights, and the expanded screen created beautiful effects to go with this song and everyone was singing along to the "ooooohs". Great fun.

At first I didn't recognise I'll Go Crazy If I Don't Go Crazy Tonight as it was so different from the album version, much more dancey. I'm not sure whether I liked it or not. Part of me was disappointed because I really like the album version, but part of me liked the risk the band were taking by doing this version. I needed time for this one.

Zzzzzz for me next, Sunday Bloody Sunday and Pride. "I'm so sick of it!" But having said that the crowd erupted when both were played, they are crowd pleasers and U2 are almost trapped into playing them. But I do wish they would be brave enough to drop more of these songs they play at almost ever concert.

There wasn't a lot of talking from Bono but he did talk at this point about Aung Sang Suu Kyi. Oh no, I thought, please don't say put on the masks..... He didn't, instead people who obviously had been picked form the crowd came out onto the walkway with masks on sticks in front of their faces and stood there as Bono sang Walk On. All the sticks were the same so they had obviously been given the masks to use by crew members. It worked quite well, better than the other idea, (maybe U2 had seen the opinions on the Net?) though sometimes you could see where Aung Sang Suu Kyi's eyes had been removed so the person could see to walk and that looked a bit weird. I didn't see anyone in the crowd put on a mask.

A heartfelt speech from Desmond Tutu about Africa was a prelude to One after which the band left the stage.

The encore started with fabulous Ultraviolet sung by Bono using a microphone that looked like a small steering wheel suspended from high within The Claw. He used the mic as a prop almost swinging on it and swinging it back and fore and catching it. I can see him missing one day and getting hit in the face! It was absolutely wonderful to hear that song again, very, very underplayed over the years. It is very strong live.

With Or Without You (Bono got no one on stage) followed by Moment Of Surrender close. It is a powerful song but I really think it is not the best song to finish a concert with.

And so that was the end of our first 360 show. The show is a barrage of music and vision, and we felt a bit over-awed at first and didn't say much.  I had been very skeptical about The Claw, I really feel shows are about the music, emotion and communication not "effects". The Claw's "effects" are spectacular, stellar and even beautiful at times, most bands would be drowned by it. Though at times it was close,  I think the band by their sheer power, pulled it off.  It was lovely to hear some rarely played songs again, though I would have been happy for there to be more rather than some of the over-played regulars.  Maybe that will happen in time.

So we walked out into the balmy night of Nice, cicadas "singing" in the early hours (the show finished at 11.45pm). We risked the portaloos which were scary but not as scary as some I've been in! We now had sore feet from all the standing, the arses had improved a little, dust and grit stuck to our sweaty, sunscreen covered bodies, we were hungry and thirsty, but happy, U2 had delivered.

Already battalions of cleaning trucks and men with witches broom-like brushes were starting the big clean up. Dozens and dozens of coaches had whisked away the people from right beside the venue into the city centre, excellent organisation. The crowd had been great, good mannered, enthusiastic and we didn't see one person drunk, the Brits could learn a thing or two on that last point! We walked up the road to the police station where we had arranged to meet Jean-Marc to take us home. As reliable as ever he soon arrived and whisked us off across the city, we hoped we didn't smell too rank in the confines of the taxi after our strenuous day. We arrived at our apartment at 2am. Jean-Marc joked Bono was waiting for us inside - he'd brought him in his taxi earlier.

Showers, then we had a pizza, followed by meringues Chantilly from a fab patisserie up the road (the best meringues I've ever had!) washed down by Moet champagne. We felt human again and the concert adrenalin was still flowing, we chatted until 5am when we thought that maybe we should go to bed.......
Posted by Sue Fell at 22:27 No comments: