More Posts in the New Year

Just to let you know that I'll be updating this site regularly again the the New Year. I've been travelling a lot recently and now with the Festive Season madness haven't had time to write this blog. So come back in early 2009 and I'll be blogging on U2 once more!
Posted by Sue Fell at 19:32 No comments:

For a while there had been rumours that U2 were going to play the Astoria in London as one of their mini gigs in support of the new album. When the gig was announced we tried to get tickets by phoning up and entering competitions to no avail. My friend and fellow fanzine editor Debbi said she would see if she could sort out tickets via Principle Management - seeing they gave fanzine editors tickets during tours maybe they would do the same now?

Nothing materialised and I went off on a short holiday to Dublin with my friend Julie. While I was there, one evening Debbi rang me on my mobile, after making sure I wasn't driving she told me that we had tickets for the Astoria gig! I was, for once, lost for words, it was only two days to the show, I would arrive home in the early hours of the day of the gig, how would I get to London (I live 300 miles away), what about accommodation, how would I get the tickets for the gig? So many questions raced through my mind along with at state close on hysteria! Debbi, bless her, said she would book my train ticket to be picked up at the station, she'd also organise the accommodation. She'd told Principle Management that I was in Dublin and they said to pop in the office.

Next day Julie and I went to Principle Management and spoke to Cecilia there. She said that my ticket would be waiting at the box office and that I would have to have some photo ID in order to pick it up. I think it was only then that I really believed I was going to see U2 play at the Astoria.
Later that day we set off on our journey back to the UK. I got home around 2am on the day of the gig. I had to be on the train to London by 6am so little sleep was had.

At 5am I threw a few things into a backpack, including my passport for ID, got a taxi to the station and caught the train to London Euston. As I sat on the train i could hardly believe what I was doing, but I knew it would be worth it.

I met up with Debbi and jackie and we headed straight to the venue. There were a lot of people millling around outside the Astoria and there were ticket touts everywhere with tickets selling for as much as £1000. There was a buzz of excitement, of something special happening – which of course was true! We picked up our tickets safely and it was then with that ticket in my hand that the excitement really built up for me.

The Astoria was a small venue, the main auditorium was reached by following a maze of corridors. The whole place looked a bit rundown, not helped by the fact it was painted in mainly in black. On either side of the small stage were two garishly coloured Doric pillars. The floor area was small and that was where the “ordinary” people were, the small dress circle above being reserved for celebrities. Among the people we recognised up there were Salman Rushdie and Liam Gallagher.

DJ Jon Carter did a set for about 45 minutes which seemed to last for hours, but when he started playing Thin Lizzy’s “The Boys are Back in Town” we knew U2 must be coming on at any moment and the rising excitement in the small venue was palpable.

At 9.30pm to the strains of The Kinks’ “Waterloo Sunset” U2 came on stage and there was immediate mayhem! They blasted into “Until the End of the World” and the whole crowd leapt up and down, and moved around the small space. I was in the middle near the front (looking back not a wise move!) and remember at one point Bono looming above me, think he was crowd surfing which only made the chaos worse! It was the one time I wished Bono would get away back onto the stage. It scary as tall men were leaning over me and pushing me down. It was too much for me and as U2 started playing “Beautiful Day” I moved the short distance to the back of the floor where there was some space to breathe, Debbi had moved there too. As the place was so small we still had a good view of the stage.

The whole feel of this show was so different to any U2 arena or stadium gig I’d been to. It was raw, sweaty, and very high energy. It must have been a little like it had been in the early days for both the band and the fans“Elevation” was next with everyone singing along with the band, it felt like a manic party. “Stuck”, dedicated to a lost friend, followed and was very moving and beautifully performed. The next song was a surprise, it was “Gone”, always a favourite of mine. By now the crowd had calmed down a little but the atmosphere still felt electric, it was good to hear that song again. U2 cranked things up a bit again with “Discotheque” followed by “Staring at the Sun” and “New York”.

So far Bono had not talked to the crowd very much, but at this point he decided to introduce the band to everyone. He said that Larry and Ann had a new baby three days previously and that she was in the audience tonight, he appeared in awe that she was there so soon after giving birth. Bono continued, saying that Adam had the “biggest bass in the band” to much laughter from the audience. He introduced Edge as the “Zen Presbyterian”. He finished off by saying that the band was “re-applying for our job” and the job was “to be the best band in the world”, this provoked a huge roar from the crowd. Then they launched into “I Will Follow” and the crowd went mental, it truly was like the roof was going to be blown off this little venue, it was the best party I’d ever been to!

An acoustic “Desire” followed, then “The Ground Beneath Her Feet” which was dedicated to Salman Rushdie who took a bow up in the dress circle to our left. Next was “Mysterious Ways”, then a lovely version of “One” during which the gig eased into another phase.

The manic excitement calmed, and a sense of intimacy, warmth and closeness replaced it.There was a little snippet of “Unchained Melody” followed by a simply wonderful version of “All I Want is You”. Bono sang the song with a mobile in his hand, I thought maybe Ali was not able to be there and was on the other end of the line, but it turned out she had been there as she was in the car with Bono when they left the venue. He must have been missing someone else as he sang that song.

Next was the highlight of the gig for me and many other fans. As the distinctive opening notes of “Bad” rang out shivers went down my spine. Halfway through the song Bono went to the right-hand side of the stage and down into the crowd and sang the rest of the song there amongst the fans. He was illuminated by a white spotlight, I had a wonderful view and will never, ever forget it. It was so powerful and emotional, one of those moments of a show you never forget, Bono, the rest of the band and the fans were one. It was an awesome performance, showing the power of music and U2 at their best, Bono is the consummate performer and can connect with an audience in a way no other can. After a little of “Sympathy for the Devil” tagged onto the end of “Bad” the band left the stage.

Chants of “40” rung out from the crowd and soon the band were back on stage to perform – “40”. Bono changed the lyrics a little, but I cannot remember how. It was the typical low-key U2 way of saying goodbye. As in the past Bono left the stage first, followed by Adam, then Edge, and after a short drum solo, Larry. And so after one hour and twenty minutes the Astoria gig was over. It was a show of distinct moods, from a raw, energetic, rocking first half to an intimate and emotional second half. I feel really privileged to have been there.

After the show we went round to the back of the venue to wait for the band leaving. It was a bitterly cold night and on top of that it started to rain. There was an umbrella factory beside the Astoria and workers there took pity on us and gave us brollies! Debbi dropped her camera I had to pick it up for her as she because her hands were so cold. By then we were functioning on adrenalin I think.

Eventually the band came out and they all came across to the fans and chatted and signed things, though in my case my pen didn't work because it was so wet! Adam was very concerned about how cold we were bless him.

And that was it, we were flying so high we stayed up all night and next day I got the train and travelled the 300 miles home. All a great madness, I was amazed at my stamina, U2 certainly gives you superhuman strength and determination! 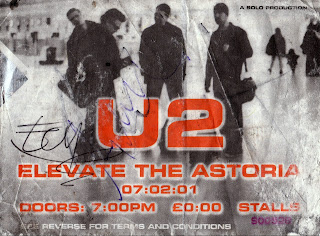