Sorry for the long gap since my last post, I just seem to have been so busy with other writing and life in general. But now I'm determined to continue updating this blog regularly until I'm up to the present day, then I'll update it when there are any U2 happenings in my life. Below is one of the most marvellous U2 experiences I've had!

All our trips to Dublin are special, but this week long 2007 trip was more special than usual, we were staying in a rented apartment – but for one night we were going to stay in the Penthouse at the Clarence Hotel – we’d saved for two and a half years for it! Debbi, Dianne, Julie and I were at last back in Dublin for this holiday of a lifetime. It was good to meet up with my friends again; we always just seem to pick up from where we left off when we get back together.

On Tuesday lunchtime we went down to U2’s studio in the docklands. How it is changing there, the gritty griminess and character being replaced by large, anonymous glass and steel buildings. Even the Kilsaran concrete yard was now closed and the famous bench gone. I’m not sure about all the changes in Dublin, so many wonderful old buildings have gone, I feel they should have done more renovation and so kept some of the city’s unique character alive within the new.

We had no idea whether U2 were at the studio, but not long after we got there Adam arrived. We had a short chat and took photos; as usual he was a real gentleman. About an hour later Bono arrived too and not long after parking his car in the garage appeared at the studio door. He made no attempt to come across the road and was clearly waiting for us to come to him so we did. He looked really well and suits the short hair; also its more natural colour is much better for his pale Irish complexion.

He was chatty and asked us various questions including what we had been doing so far on our holiday, we told him about our trip to Brittas Bay the previous day and he said he loved it there. We all got autographs and photos taken with him. We hadn't been sure whether to tell him about our stay the penthouse at the Clarence later that week. Debbi quietly asked me. "Shall we tell him?" H heard and said. "Tell me what?" His eyes going back and for between our faces. Don't know why but I quietly said to Deb ."Ok." (As if he wouldn't hear me!) Debbi then shared our plans with him. Bono asked what we were celebrating and we told him it was a special birthday for Dianne. He was too much of a gentleman to ask how old she w 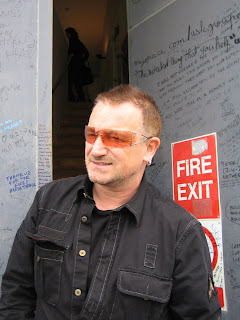 ould be, I jokingly told him she was 30! To which Diann said. "It's a long time since I've been 30!" I added that we'd be saving to do this for ages as I didn't want him to think we were rich fans who could do something like that whenever we wanted. He said we'd love it in the penthouse, and after wishing Dianne a happy birthday and saying goodbye he went back into the studio. It’s always so good to meet Bono, he has the ability to make everyone around him feel special and important and we were certainly full of smiles as we left Hanover Quay that day!

The limo was a bit late, the chauffeur couldn’t find us! After I gave directions over the phone he was soon there. It was a white stretch limo, black leather seats, yet let down by plastic glasses for the “champagne” which tasted more like Cava to me. It was all rather over the top for my liking, but still, it was special and that was what this day was all about. We sat inside watching a U2 DVD and drinking champagne as the driver took us on a tour of the city. I really just wanted to get to the Clarence!

When we did get to the hotel we were treated like royalty and shown round the ground floor of the hotel (as if we'd never been there before) before getting into the lift up to the penthouse. We were so excited it was hard to remain calm! 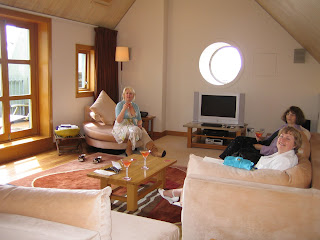 The staff member showed us around the two floors of the duplex penthouse before leaving us on our own. It was then we could let go and just explore.

The penthouse was fantastic, much bigger than it looks on photos and everything of the highest quality. We had welcome cocktails waiting for us as arranged, but there was also a bottle of champagne in a very expensive looking Alessi cooler on ice with 4 glasses which wasn't part of the deal. We checked with reception and were told it was complimentary, so we popped the cork, the champagne was wonderful!

We spent the after just enjoying the penthouse. On the lower level was a sitting room, dining room, two bathrooms, a kitchen and two bedrooms. Along the entire front of this was a balcony overlooking the River Liffey and Dublin. The upper level was reached by a stylish oak and stainless steel spiral staircase. This level was open plan at one end a seated area the other end had a baby grand piano and a very well stocked (and expensive) bar. There was a balcony at the back where the hot tub was. There was also a small balcony at the other end of the loft that gave you a lovely view onto the city.

We relaxed in the hot tub with our champagne, we chatted as we watched DVDs on the huge TV. We could hardly believe that after over two and a half years of saving we were finally in the penthouse.

In the early evening we started getting ready to go down to the Tea Room for our meal. We had bought special outfits and I must say we looked so glamorous – we barely recognised each other!

At 8pm we went down for dinner, we were greeted by a lady who said, “You are looking very beautiful tonight ladies” and we were shown to our table. There was an envelope on the table that the waiter handed to Debbi. She opened it and for a few seconds just stared at it. We all guessed what it was even before she read it out and then passed it round it said "Happy Birthday, love Bono”. Before we had a chance to say anything the sommelier was there pouring champagne. Debbi asked if it was from Bono and we were told yes. We were so surprised and touched that he'd done this we were nearly crying! For a while we were speechless (which doesn't happen often) and it was a while before we got ourselves together and were able to look at the menu and order (which also doesn't often happen!!) 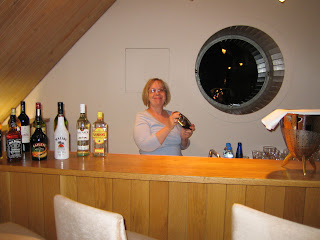 The meal was wonderful, excellent quality and service. We'd planned to have a very special expensive bottle of wine with our meal so we still had that too. It turned out that we didn't have to pay for that either, all our drinks that night (including the champagne that had been waiting for us on our arrival at the penthouse) were on Bono. Even now I can hardly believe he did this for us, going to the penthouse was exciting enough, but for Bono to do this made it perfect, it was so thoughtful and kind of him.

After finishing the wine in the Study we went back up to the penthouse. We stayed up all night chatting, drinking wine, having a laugh, making a video and watching DVDs, we didn't want to miss a minute of our stay by sleeping. Sometimes we went out onto one of the balconies to look at the lovely view of the lights of Dublin at night. It felt like we were in another world high above those lights and, really, we were. We were in the rarified world of the rich and famous, sampling their lifestyle for 24 hours and we were loving it!

We watched a beautiful dawn break over the city from the balcony which signalled that our stay in the penthouse was nearly over. I felt sad that it was coming to an end, yet I also felt lucky. Lucky that I could afford to do something like this - even if it meant a lot of saving. Lucky to have three special friends in Debbi, Dianne and Julie to share this with. And lucky to be a fan of Bono, whose thoughtful kindness made our stay at the penthouse at the Clarence Hotel absolutely perfect.
Posted by Sue Fell at 16:21 1 comment: