I had been told one of the best ways to see the Dublin area is by travelling on the DART (Dublin Area Rapid Transport) suburban railway from north to south. So, after breakfast, I headed to Connolly Station and got on the green DART train that was heading north to Howth - Binn Eadair in Irish. The train was comfortable and, at this time of day, quiet. It glided smoothly out of the city centre and through the suburbs of north eastern Dublin that sk

irted Dublin Bay. As the train approached Howth, the bulk of the Ben of Howth loomed ahead.
I got off the train and walked the short distance into the village. It skirted the north coast of the peninsula and had a pretty harbour full of fishing boats. A short distance offshore I could see the little island known as Ireland's Eye which was a nature reserve.
Howth was very rocky - rocks jutted out at weird angles on the hill and out of the sea, the cold wind blew in from the north and nipped my cheeks, very bracing! Behind the small harbour with colourful fishing boats there was a parade of shops along the main street.
I stayed in Howth for about 15 minutes before heading to the DART again. I was glad to be back in the warm and snug train - this time I was headed on the longer journey to the southern terminus of the DART at Bray - Bre in Irish (I was beginning my education in the Irish language on this trip too!).
We travelled back into the city centre and on across the Liffey, we passed Sydney Parade station which I remembered from James Joyce's book Dubliners. At Booterstown the train line suddenly opened out onto the coast and the view across the wide expanse of Dublin Bay was beautiful. The train continued south following the sweep of the bay to the port of Dun Laoghaire, with it's church steeples, myriads of boats and large harbour around which two piers gracefully curved like huge arms holding the water in an embrace.
I stayed on the DART, as it travelled on through upmarket Dalkey and into a long tunnel which opened out onto Killiney Bay. I was stunned by the view, the sun was now shining and the sky was azure blue, a shimmering, crescent-shaped bay with sandy beach lay ahead. It was flanked by granite hills to the right of the DART line on which were scattered large Italianate mansions.
Killiney was so gorgeous I decided to get off the DART there. I walked down the steps onto the beach which, surprisingly, was very quiet. the sea was very blue and calm, the only sounds were the seagulls and the waves lapping onto the beach. It was such a relaxing place and I enjoyed half an hour wandering along the beach.
I then decided to walk up Killiney Hill. This was quite a hard walk up very steep narrow roads lined by with beautiful mansions with lush gardens and high, natural grey stone walls. The unusual smell of eucalyptus hung in the air. The area had a Mediterranean feel to it. Later I was not surprised to find out that this was where the millionaires live - including someone called Bono.
On Killiney Hill the view was glorious, to the south taking in all of Killiney Bay and beyond, the humpback of Bray Head and volcano-like peaks of the Sugarloaf mountains clearly visible. From the white Victorian obelisk on the summit of the hill, the view to the north was just as stunning, Dalkey Island, that separates Dublin and Killiney Bays, Dun Laoghaire, the city and bay of Dublin and Howth Head where I had been that morning. I sat on one of the granite rocks warmed by the sun and admired the view as magpies cawed and darted around me. I had never realised the area around Dublin was so scenic. 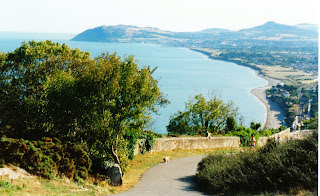 Time was passing and I reluctantly tore myself away and had a leisurely and easy walk down to the DART station and got the next train back to the city.
The benefit concert at the Abbey Theatre was due to start at 7.30pm and I arrived there at 6.45pm. Quite a few people had already congregated at the theatre and a jazz band was playing in the street. There was a lively atmosphere and the evening was warm so waiting wasn't unpleasant. I occupied my time learning a bit of Irish: bruscar - litter, sraide -street, mainstir - abbey.... well it helped pass the time!
Adam looked right at me (I wasn't far away) and smiled warmly and nodded, how nice! Shortly afterwards Edge arrived with his wife Aislinn. After this there was quite a long wait until we saw Bono arriving at a side entrance of the theatre, he turned and waved to the waiting people and then was almost dragged inside by two security men! I was a bit disappointed, but the Bono I'd heard of was always good with fans so I thought it was worthwhile waiting a bit longer.
There were other famous people at the benefit including Burgess Meredith and Daniel Day-Lewis and Daniel came out to meet fans and sign autographs. I got his autograph, he was very nice and seemed quite shy.
By 9.45pm my poor sore, blistered feet were protesting and I was beginning to tire of waiting for Bono. Then, as if my thoughts had been read, the side door opened and there was he was! I was not far away, and could hardly believe my eyes! His hair was very long, too long, and he had beads of sweat on his face, as if he'd just come off the stage. Some of the young girls there got really excited and started screaming. Bono said that if everyone stayed calm and quiet he would stay out and sign autographs. Luckily the girls calmed down and he stayed out.
I was the first to get an autograph - on a straggly piece of paper I had - it had never occurred to me that I might meet any of U2 in Dublin so I didn't have an album cover or anything like that with me. I think he said something to me but I can't remember what he said!
He spoke very quietly and had an aura of calm about him which helped keep the fans calm too. He was smaller than I imagined, only a little taller than me and I'm only 5 feet 3 inches, he was also slighter in build than I expected too. He had that typical pale Irish complexion, the most gorgeous blue eyes and exuded charisma.
I honestly could not believe what I was seeing - and at one point I just reached out through the crowd and gently touched his arm, and yes, he was real! One of the young girls asked him to sign her tee-shirt which he did, then she asked for a kiss, which she duly got. She was over-joyed and kept repeating,
"I'm going to die!"

To which Bono said,
"No, you're not" with a smile, he clearly found her ecstasy very amusing.
He signed more autographs patiently before going back inside. I'd barely caught my breath when he came out again and left with his wife Ali, who was heavily pregnant with their first child, and was driven off into the night. 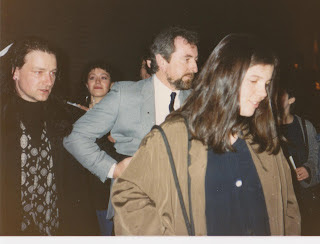 As I walked back to my hotel my head was buzzing and I had a big grin on my face! I had not expected to see Adam and Edge and meet Bono in Dublin and I was so thrilled that I had. Bono had been warm and charming in person, genuine and attentive, everything I had hoped he would be.
This was my last night in the city and it was the perfect ending to my short trip. I was sad to leave the next day, I had felt so at home in Dublin, it was my kind of place Many years later Bono's lyric from Summer Rain said it all for me:
"It's not where you're born
It's where you belong"
And that was how I felt about Dublin, I belonged. I knew then that I would be back, and so began a love affair with this city that continues to this day. And as I write on this day, 26th April 2008, I realise that it is almost exactly 19 years since that first visit to Dublin and that first meeting with Bono! How that time has flown by!
Posted by Sue Fell at 14:50

Wonderful Sue! Really enjoyed this. Isn't is strange and wonderful how far you have come since that first meeting all those years ago.

And from one extreme to another.... Bono had very long hair then, and now he has hardly any! :) What did you do to him, LOL

Thanks Deb, doing this is bringing back many happy memories.